The First Painting of a US President does show that the back ground is the US Flag moving in a  strong windy day and shows even the high speed wind reflected on the flag flips, the President shows with his side look that he is seeking the loyalty of the countries who support him as a President and support the americans as a Nation

And shows the US President  standing stable with Pride as the 45th American President Taking his job very seriously with his small side look , it says that he is seeing every thing around him and nothing effecting him, solid and calm as a President and even on this windy day and with its world problems

Will not effect him at all

The Artist named this unique Painting  SUPPORT my Policy

That is what made the Artist to create this Painting  .

The countries Relation political Art recommendation:  this unique Oil Painting of the President should be Placed

In all foreign Embassies and consulates in Washington,

in foreign countries having a good relation with USA and its President.

In meeting rooms where the head of country discussing various Political situations,  which make the delegation will be pleased to see CRPA Portraits.

Political Art Painting for the Government 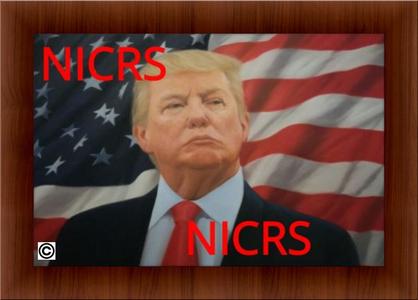